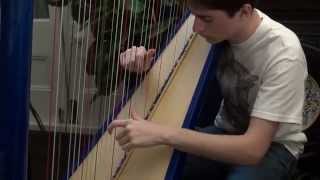 Welsh Harpist Benjamin Creighton Griffiths made his international debut in 2004 while still only 7 years old and on that occasion he won second prize in the Under 18 section of the 1er Concours International de Harpe in Nantes, France.

In 2006 he won the Under 13 Competition at the Wales International Harp Festival and in 2008 won the Under 16 competition of the Concours de harpe Lily Laskine, in Paris. His prize was a Salvi Concert Harp.

Since then he has been earning himself an enviable reputation as a young International Performer. As well as performing extensively across the UK he has given many international concerts touring to Brazil, Canada, The Caribbean, Croatia, France, Hungary, Italy, Czech Republic, Netherlands & Spain.

In 2007 he performed at the European Harp Symposium in Cardiff, performing solos and a duet with the Russian Harpist Andres Izmaylov. Following the success of this concert Benjamin was invited to give a concert at the 10th World Harp Congress (Amsterdam, 2008) and soon after that was invited to the 11th World Harp Congress (Vancouver, 2011) to perform both a solo recital and to take part in a Gala Tribute Concert to Ceren Necipoglu who was returning from performing at the Rio Harp Festival, Brazil aboard the Air France plane which crashed in May 2009.

Benjamin is an Official Ambassador for George Thomas Hospice Care, The British Heart Foundation Cymru and St. John Cymru Wales. On 1st March 2010 he performed at Clarence House for HRH the Prince of Wales at a reception for George Thomas Hospice Care. Benjamin has also supported many other charities including Welsh Hearts, Amnesty International, Tsunami Earthquake Appeal, Cancer Research, Macmillan Cancer Relief, Teenage Cancer Trust Wales and Save the Children.

In 2011 Ben took part in “Born to Shine” (ITV 1) as mentor to Welsh rugby legend Gareth Thomas who learnt to play the harp in 6 weeks. The programme raised over £2,100,000 for Save the Children. Benjamin had previously made two TV programs with the BBC – Take a Bow (2007) and Bobinogs (2008). Other TV appearances include performances at the Urdd Eisteddfod, Carolau Llangollen, Noson Lawen and BBC Children in Need. His radio broadcasts include his performance at the 2006 UK Holocaust Memorial Event, The 1st Wales International Harp Festival and Catrin Finch’s BBC Radio 4 documentary Master Harper. He has since been involved in two further BBC Productions, a program with BBC Wales in 2014 about the life of Lady Llanover where he performed as a Welsh Triple Harpist, and Show Me Show Me (2015) for Cbeebies.

For the last two years he has also been teaching and leading a series of very successful ‘Introduction to Improvisation’ workshops as both one off events and at Harp Festivals worldwide, aiming to encourage harpists of all ages and abilities into the world of jazz.

Ben has produced three jazz CDs so far. His first was “An incomplete A-Z of Jazz Harp Music” – released in May 2012. It featured a number of solo, acoustic jazz standards. Then, in 2015, he released “Pedals & Paws” – a CD that featured his first foray into the use of electronics in his jazz performances and also contains the titular jazz suite (Pedals & Paws) written by Ben. His latest CD, “1 Man Band” is a further development of this work. Released in February 2017 it features Ben performing on Harp, Piano, and with synthesisers and keyboards. It is the repertoire on this CD that Ben will be performing during concerts in 2017 and 2018.

Benjamin also continues to add to his sheet music portfolio. His popular “Jazz Harp Series” continues to grow with a selection of solo and group pieces and features a number of very well known jazz standards arranged for harp.

2017 looks set to be a busy year for Ben. Scheduled performances and teaching duties are set to include the Cardiff Camac Harp Weekend (March), The New Orleans Jazz and Pop Harp Weekend (June), and his Asian debut at the 13th World Harp Congress in Hong Kong (July). He is also set to record and perform in the UK with French Gypsy Jazz artists Adrien Chevalier (Violin) and Tatiana Eva-Marie (Vocals) in May. Finally Ben is looking forward to launching a collaborative project called Chube with friend and contemporary Matthew Williams (Percussion). They will be appearing at Harp on Wight (October) as well as scheduling other dates in the latter half of the year. They will also be writing and recording an EP in the summer.